Blue whales, the largest animals ever to have inhabited the planet, come near shore in only a few places on earth. Loreto is one of them. Anywhere from 12-30 blue whales will visit the Loreto area between January and mid-March each year. They are joined here frequently by humpbacks, fin whales, and the smaller rorquals such as Sei, Brydes, and minke. Indeed, one third of the world’s whale species have been documented in the Gulf of California.

Last week I went out with some friends in the panga of Fernando Arcas, who has been researching and documenting whales and their behavior here for over 30 years. Some individual whales have been coming back that whole time. At one point, we were surrounded by 4 blue whales. That tall plume of their breath catches the sunlight and shows up well in front of the dark mountains to the west.

Blues are fast, as one might expect of a 90-foot long, streamlined sea creature. You never know where they will surface. We were lucky a few times to have one pass within a few dozen yards. The explosion of breath is powerful, yet their movement through the water is smooth and graceful. Sometimes the series of 5-8 breaths ends with a fluke, when the whale puts its tail up to assist in a deep dive. This is the most breathtakingly graceful of all. 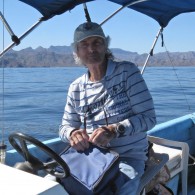