It all happened one windy day on Isla San Jose.

We left the kayaks for a short walk, still wearing our paddling kit. From the slickrock point with the fossil turtle and whale bones, there was a remarkable vista inland, a lowland of red and pink rock with patches of greenery, backed by an imposing white cliff. I recalled there being an interesting walk this way through an arroyo of wind- and water-sculpted pink sandstone. Off we wandered, in our booties, sandals, spray decks, and PFDs. Through a green tunnel with a white sand floor, past cliffs of pink gargoyles.

Edgar stepped up a small rise and stared off at the distant white cliff. He was hearing its call. In the catacombs of the lowlands, we didn’t feel the wind we’d be paddling against when we returned to the water. Edgar hesitated.

“One more bend,” I encouraged.

We entered a section of blind curves with brick-red walls and a white sand carpet.

We came to a pouroff some 6 meters high. I hesitated.

“Just up there it gets out of the red zone into the white,” Edgar pointed out.

Back a few curves was a slope we could scramble up for a view. Ramon caught up to us after a detour up another branch. I led the charge. “If we follow this ridge around there, it looks like we could come very near the foot of that white wall.” I suggested. We stood on the hill in our paddling kit and debated briefly, then marched off along the ridge.

The white cliff was close. Edgar couldn’t stop himself. He found a slope back down to the white sand arroyo bottom, and continued up its path, over occasional rocks, with Ramon and I in close pursuit.

It boggles the mind to consider the shells imbedded in these rocks up here. The thickness of the white cliff tells of long accumulation. Then the height to which it’s been lifted out of the sea… And who ever thought a clam could contribute to the building of a mountain anyway.

We touched that white wall, three kayakers wandering overdressed in the desert. And then we returned to the sea, where it all began.

Sea Paddler Training
We Got the Blues!
[contact info] 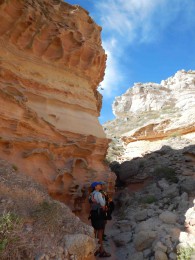 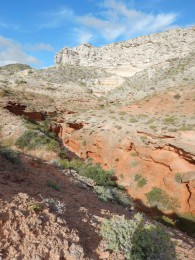 Canyon to the Wall