In an emergency, call 911. This will even work from a foreign phone in Mexico. The dispatcher should be able to find an English speaker quickly and activate Red Cross/Hospital or the Firemen.

Here in Loreto, children play on their skateboards and roller blades in the recently paved central square in the evening. Tourists and locals alike walk and jog along the waterfront at any time of day. Open air restaurants leave their tables and chairs out overnight.

Loreto is not listed in any travel warning nor considered hazardous. The US Department of State has posted this about traveling in Mexico–

“Millions of U.S. citizens safely visit Mexico each year for study, tourism, and business, including more than 150,000 who cross the border every day. The Mexican government dedicates substantial resources to protect visitors to major tourist destinations, and there is no evidence that organized criminal groups have targeted U.S. visitors or residents based on their nationality.” (http://travel.state.gov)

Do exercise caution in La Paz and Los Cabos, the capital of the state of Baja California Sur. Targeted drug-related violence occasionally happens due to turf struggles but authorities believe it will be self-limiting.

Loreto is in a desert, which makes it a poor growing region for anything, including marijuana. It is not a border town or a major population center, so it’s not on the way anywhere important, and not a market in itself. Baja is Mexico’s Alaska. Indeed, Loreto is far safer than many US cities.

The worst violence in Loreto is aggresive salespeople from outlying developments who will hail you in the airport or the walking plaza and try to convince you to visit the resort. They work on commission and they are hungry.

Being in Loreto does not necessitate any special measures for personal safety. If it were otherwise, I wouldn’t be here myself.

When you fly, the majority of your travel companions will be tourists, or US/Canada citizens who have second homes south of the border. Waiting areas in airports are a controlled environment. Exercise the typical precautions such as keeping your luggage within your sight at all times.

If you travel by bus, your travel companions will include a broader cross-section of the local population, the vast majority of whom are kind and helpful. However, you do need to keep an eye on your stuff in terminals and on the bus. Checked bags go under the bus and passengers have to show their ticket to retrieve them, so they are relatively secure. Especially for overnight rides, hold your carry-on bag or place it next to you so you can feel if it moves. Be aware if you stow anything overhead. Stow it in front of you, within your sight, and keep an eye open, especially as people exit the bus.

I’ve done several long bus trips in Baja. They have been uneventful, except for the meeting of some marvelous fellow travelers.

What’s the weather?
Getting to Loreto 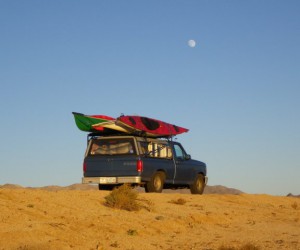