In the United Kingdom, the governing body for paddle sport is the British Canoe Union.  The BCU was formed in 1936 and for some time has been an internationally recognized organization setting a high standard in paddle sport coaching and leadership.  In North America there is a following of dedicated paddlers training amongst and as BCU coaches and leaders.  There are five coaching awards recognized by the UKCC and 5 levels of star awards.  Star awards are personal skills awards and the two top awards, 4-star and 5-star, are leadership awards.  The 5-star sea leader award is the coveted gold star of all sea kayaking certifications, is achieved by very few paddlers in North America and states that one can competently lead a group of paddlers in any conditions on the sea.  In short, anybody who earns the 5-star sea leadership award is a damn fine paddler with extreme competence, judgement, seamanship and leadership skills.

Santiago Berrueta is the newest BCU 5 star sea leader in North America and the only Mexican citizen to ever achieve this award.  Congratulations!

Santi has been paddling seriously since 2006 and has been training for this achievement ever since, whether he knew it or not.  He’s had some excellent mentorship along the way and learned even more on his own, whether training his personal skills or expeditioning the Baja coast.  He’s one of the most organized paddlers I’ve ever spent time with and the most fun.

Santiago is a huge part of Sea Kayak Baja Mexico and leads expeditions from Loreto each season while coaching clients and training other guides.  Growing up on the Mexican Pacific Coast, he has a deep connection to the land and the sea.  A paddling trip with him on the Sea of Cortez will never be forgotten.

With his wife Patricia, Santiago owns and operates Kayak Latins Du Nord, based out of Quebec.  They run a variety of trips in the Saguenay Fjord, the Mingan Archipelago and to other parts of the world. He’s also involved with paddling events near and far, coaching at events like the Golden Gate Sea Kayak Symposium in San Francisco and the Bay of Fundy Sea Kayak Symposium in Nova Scotia.

For his recent 5 Star Assessment, he traveled to Pembrokeshire, Wales to paddle the cold, dynamic British Waters known as a proving ground for sea kayakers around the world.  For a look into his experience, check out the photos below: 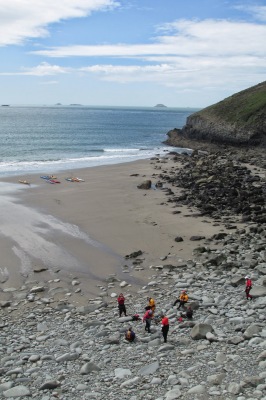