A creature that doesn’t swim is listed as a marine mammal in a book I recently picked up, The Gulf of California Biodiversity and Conservation. Thirty-nine percent of the world’s marine mammals can be found here in the Sea of Cortes, including this little one in the Vespertilionidae family. It’s a bat.

The Mexican fishing bat eats and drinks wholly from the sea. A diet of fish will give it green guano, while lobsters come out red. The ones we found had dined on lobster, which was interesting to imagine. However, in the second of four life phases, post-larval lobster become swimming pueruli, which look tiny transparent shrimp. They seek out red algae, so it’s probably the pueruli which the bat eats.

After searching several beach-access caves, we located 4 Mexican fishing bats in a crevice on the north end of Danzante Island.

We saw 5 other species of marine mammal as well: blue whale, Bryde’s whale, common dolphin, bottlenose dolphin, and in Magdelena Bay on the Pacific side, the gray whale. Mother grays are now getting their calves ready for the long journey north, and we were lucky enough to watch several of them nursing their babies in waves of the mouth of the bay.

Rocks and sun also featured themselves on our Natural History trip. A sunrise paddle gave opportunity to see geology in a new light, including some impressive volcanic dikes where the red “toasted” rock around the intrusion itself is clearly visible.

Recent rain gave plants a reason to enthuse, from the new red growth of the sour pitaya cactus to the brilliant orange pega-pega. The creosote bush dressed in its best yellow for the occasion. The creosote bush is the First Plant in some Native creation traditions.

I appreciate every opportunity to go in the field with naturalist Andrew Amlen. His curiosity is contagious! He also brings out aspects of Marcos’ knowledge (and singing capacity) that I never realized. An enriching experience! 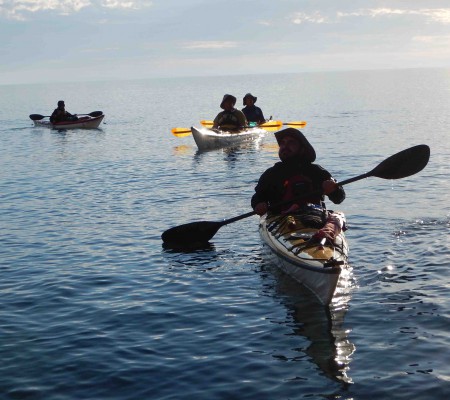 Returning for breakfast after a sunrise paddle 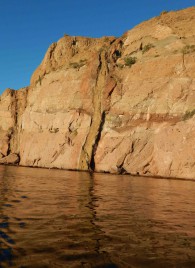 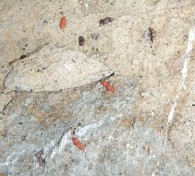