Why we chose Loreto

We chose the Loreto area because it speaks to our spirits. Loreto is snuggled between the mountains and the sea. The Sierra la Giganta rise almost a mile high. Expressing themselves in an array of volcanic colors, they make an impressive backdrop to life in Loreto and on the islands.

Five major islands surround Loreto, all of which are now encompassed in the 510,000 acre National Marine Park of the Bay of Loreto. The size of the islands, their diverse beauty, the distances between them, the spacing of their beaches, and the management policies of the park make the Loreto National Marine Park an ideal destination for expedition-style kayaking trips.

Leaping mobula rays: a BBC video
Great wildlife is just one of the reasons we love Loreto!

In the ol’ blue Ford pickup, Loreto is 2 days south of the border, or 6 hours north of La Paz. It’s at exactly 26 degrees north latitude, which means that for about 2 hours at the right time of the night in winter-spring, the southern cross is just visible on the southern horizon. There is virtually no light pollution to diminish the glory of the stars.

Loreto is situated on the eastern side of the Baja California Peninsula, on the shores of the Gulf of California (or Sea of Cortez). The peninsula is thin enough to offer courses and combo trips that visit both the Gulf and the Pacific lagoons and surf.

The present US state of California and the Baja California peninsula once shared an identity and were served by a network of missions, joined by the legendary “Camino Real” mission road. The US has since acquired “upper California” and Mexico “lower California.” “Baja” means lower in Spanish. Loreto was the site of the very first mission in all the Californias. The mission and its museum are worth a visit!

What’s the weather?
Opinionated Loreto History
How do I get there? 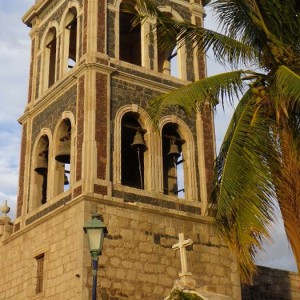 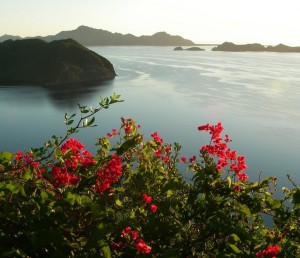